The coronavirus pandemic turned the working world upside down. Many quickly realized the difficulties in working from home and its myriad distractions. As a result, people naturally gravitate toward the idea of soundproofing their room. While not a very difficult topic to convey, soundproofing is challenging to execute.

Let’s dispel the biggest myth upfront: soundproofing, which means no sound at all coming in or out, is nearly impossible and not a plausibility in the home. What most people seek is more accurately called sound isolation, meaning how much sound can be eliminated from coming in and out of the room based on volume and frequency.

The Ins and Outs of Sound

This article is not meant to be uber-technical, but a few concepts must be conveyed that require digging into the details. Let’s start with defining ‘sound.’ There are two parts to sound - volume and pitch. Volume measures how loud the sound is in decibels (dB). Pitch measures the frequency of sound in Hertz (Hz). Both volume and pitch matter greatly in sound isolating a room. The loudness and frequency of a sound determines how it transmits through the walls. A change of 10 dB is perceived as being twice (or half) as loud.

The concept of frequency (pitch) is important to understand. As frequency decreases (think of bass notes playing on a subwoofer), the sound becomes harder to contain. The higher the frequency (a child screaming for example), the easier the sound is contained. Lower frequencies are harder to isolate than higher frequency due to the way sound travels. This works in your favor if you’re trying to isolate sound in a home office, as most of the sounds are vocal and usually without much bass. Isolating sound in a home theater, meanwhile, is more difficult, with sounds that play at loud volumes and low frequencies (an explosion or a dinosaur smashing its foot on the ground, to use two examples).

When sound isolating a room, knowing how much sound you wish to reduce, and at which frequencies you are reducing, allows for a more precise design. The reminder of this piece covers sound isolation in the human vocal range and doesn’t cover isolating bass frequencies. 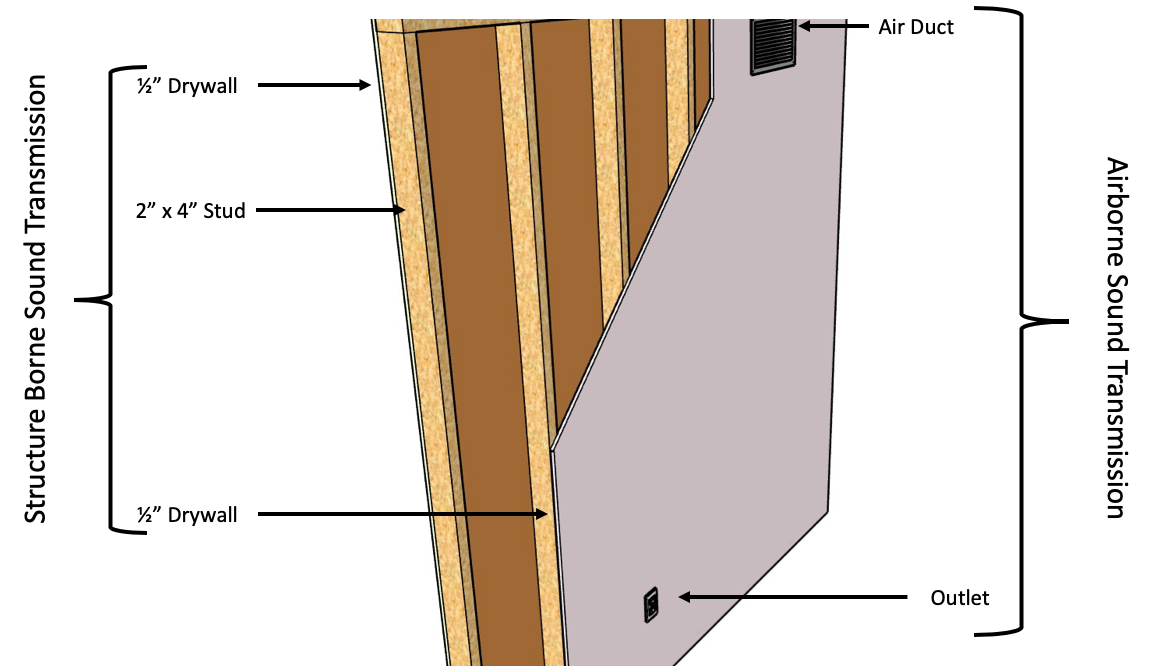 There are two ways that sound from outside the room can enter your home office: airborne transmissions and structure-borne transmissions (Figure 1). Sound travels through the air (or structures) in waves. In general terms, the height of a sound wave is the volume (amplitude) while wavelength is the distance between waves. Air is a good conductor of sound, so it travels and weakens (attenuates) at predictable rates. In the room you wish to isolate, airborne sound transmissions are areas where sound can freely travel. In Figure 1, airborne sounds come through the return air duct, which freely moves sound. A wall outlet can be an airborne sound source if there is a gap in the wall or the seal isn’t tight. 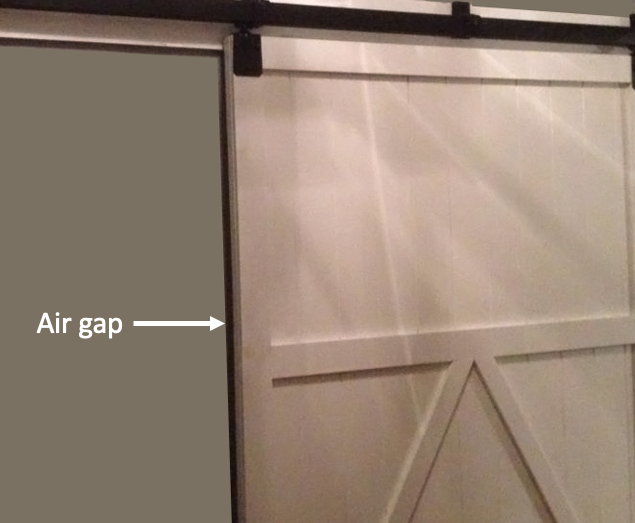 Another example of airborne sound transmission is a barn door (Figure 2). Because a barn door swings freely, there is no seal and air travels freely through the gaps between the door and wall. A barn door provides little sound damping compared to a traditional door. Traditional doors should use solid cores instead of hollow, as they are significantly more effective in sound isolation.

Structure-borne sound transmission is more difficult to deal with than airborne. In an enclosed room, almost all of the sound you are hearing is structure-borne sound, which occurs when a soundwave hits a surface (such as a wall). For example: Mary is working in her home office when seven-year-old Johnny screams at the babysitter (Figure 3). Mary’s home office is a standard four-walled home office. The energy from Johnny’s voice (in soundwaves) strikes the exterior office walls at approximately 761 miles per hour, hitting the walls and bouncing around the room. Some of the energy, however, is absorbed by the walls, causing them to vibrate. The vibrations travel through the wall’s studs and inside air cavity, causing the inside wall to vibrate. 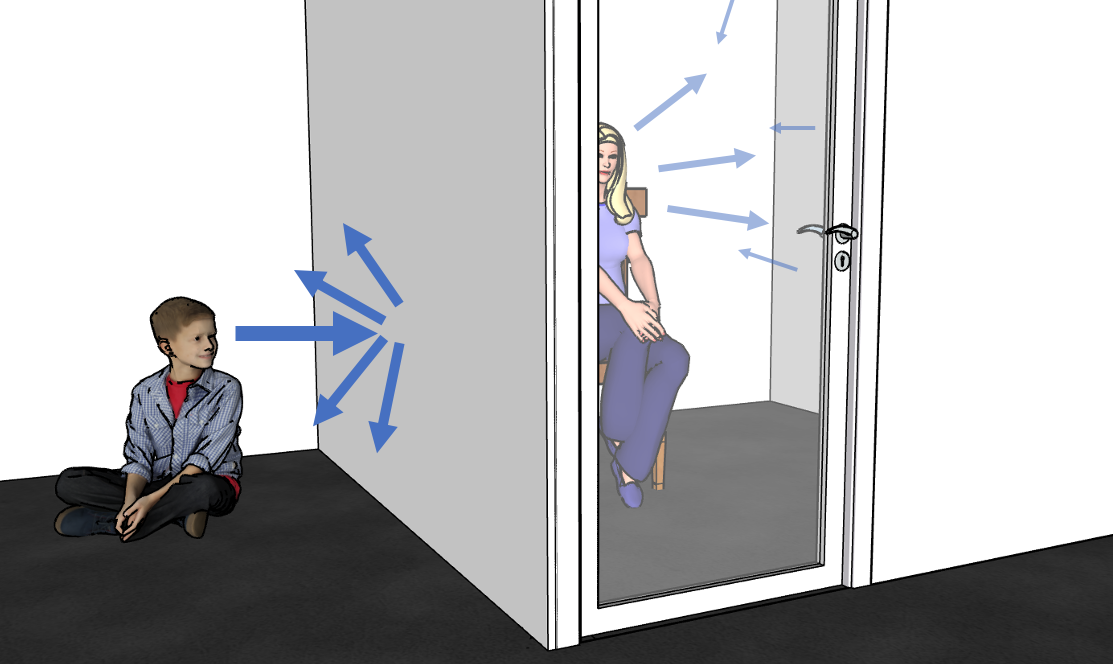 This vibration acts very much like a large speaker, transmitting audible sounds in Mary’s office. While the scream inside her office is quieter than in the living room, it is still loud and makes work difficult. The methods below show how to reduce sound inside the office.

In order to sound isolate a room, you must fix both airborne and structure-borne sound paths. Airborne sound isolation is straightforward: eliminate any holes or gaps. If the room has a drop ceiling, switch to a drywall ceiling. If you have a barn door, replace it with a traditional solid-core door. If there are holes or gaps small enough to caulk, use acoustic caulk such as StopGap™. One of the trickier sound isolating areas in existing construction is the air ducts. It is a complicated topic and we won’t cover it here, but if your child is screaming near an airduct, and the ducting is metal, some sound may enter the room.

Next, let’s address isolating structure-borne sound transmissions. There are two approaches: decoupling and adding mass. Often both approaches are combined in order to yield the best results. Testing the results is based on scientific methodologies measured in STC (sound transmission class). STC is based on decibels, and while we won’t get into the science too much, an increase in STC by 10 means the sound is half as loud. Going from an STC of 35 to 55 means the sound is approximately one-quarter of what you would normally hear. Traditional inside wall construction with 2x4 studs and no insulation has an STC of around 38. 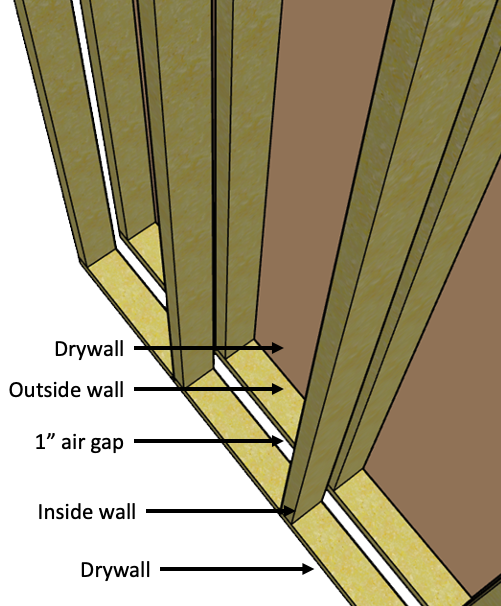 Decoupling means separating surfaces to keep either side of the drywall from touching each other. By not touching, direct vibrations are eliminated between the two surfaces. Air between the walls will still transmit some sound but is greatly diminished. The air cavities can also be treated using acoustic insulation such as mineral fiber. There are several ways to decouple walls, but the main goal is to make sure the walls on each side aren’t connected to the same stud. In residential construction, the best option is to build two separate walls with a one-inch air gap between the two walls (Figure 4) and filing the cavity with mineral fiber. Double wall construction with insulation has an STC of approximately 56[1].

The cost of using these construction methods come in reducing the room size by a few inches. The depth of a standard inner wall is 4.5 inches thick, including drywall. A staggered stud wall increases the thickness to 6.5 inches. Double-wall construction with a one-inch air gap is 9 inches thick. For rooms where space is an issue, staggered or decoupled wall construction may not be practical. 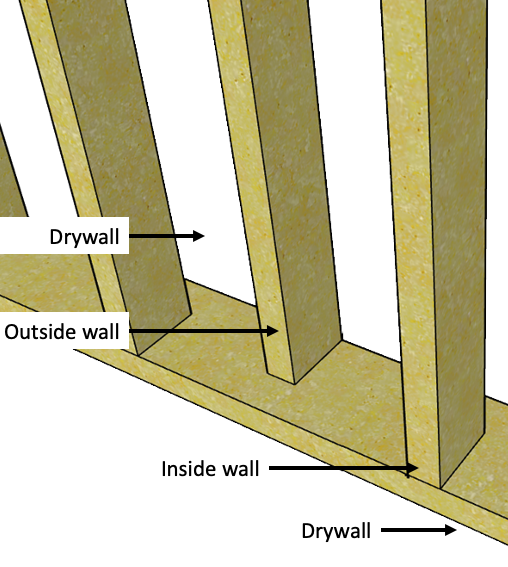 Another way to decouple walls is through mechanical decoupling, which uses metal products fastened to the walls, thereby allowing the drywall to “float” off the studs. This is usually accomplished by using steel like the RC-8™ Resilient Channel, which pushes the drywall approximately a half inch off the stud. Care must be taken when installing resilient channel, but when done right, the drywall vibrations don’t transfer to the studs and more sound is isolated. The STC of traditional walls with resilient channel varies between 45 and 52.

Adding mass is another way to isolate structure-borne sounds. The idea here is exactly as it sounds. The denser the wall, the less likely sound vibration will travel through it. There are two basic ways to add mass to walls. The quickest way to add mass is to add an additional layer of drywall to each side of the wall. A 2x4 wall with insulation and two layers of drywall has an STC of 43.

Another way to add mass is to use limp mass loaded vinyl (MLV), like SheetBlok™. MLV is a thin, dense, rubber-like material used as one component of a multi-layered construction scheme. MLV is useful for decoupling (i.e., floating) floors and walls in isolation construction applications. It has an STC of 27 on top of the existing wall construction STC.

Having addressed home office walls, the next issue is floors and ceilings. If the floor is on the ground level, or is thick concrete, you probably don’t need to do much to isolate sound (for a home office). As mentioned earlier, sound isolating for voice is much different than for home theater. Generally, you should float the floor and/or ceiling. If you are isolating the floor, you want to decouple and add mass. Decoupling the floor can be very simple. The easiest way is to use U-Boat™ Floor Floaters and build a platform on top. For the ceiling, either suspend the ceiling with resilient channel or use two layers of drywall with mass loaded vinyl between the sheets.

The topic of sound isolation (inaccurately referred to as soundproofing) may seem daunting at first, but it really is fairly straightforward. Address any airborne sound paths and use decoupling and mass for structure-borne sound transmission. The construction methods are very similar to the methods used in modern home building. The only aspect which may be unfamiliar is resilient channel, so it is important for all crew members to know the best practices before hanging drywall on resilient channel.

A sound-isolated room, however, is only as good as its weakest link. Sound travels like water flows, looking for the path of least resistance. It is important to follow the installation guidelines closely.

Due to the events of the COVID-19 pandemic, many have learned the value of silence. Sound isolating a room is a terrific way to create a room that is both functional and fosters creativity through reduced distractions. Sound isolation requires significant thought to execute. When done properly, however, the results are stunning.

If you are interested in sound isolating a room and need some guidance, please reach out to the staff at Auralex Acoustics and we’ll set up a time to talk.

Editor's Note: Redfin asked Pedigo about this topic for an article, "Expert Tips for Soundproofing Your Home Office," posted on September 24, 2020.

[1] Please note: do not put drywall on the insides of each wall when doing double-wall construction. Doing so will significantly negate the effects of the sound isolation.