System of a Down have engendered a sound transcendent of trends or labels and find themselves in an elite class of rock acts.

Serj Tankian, the compelling singer of SOAD, in a manner as individualistic and distinctive as his music, embarked on a personal project studio build effort. His web search led to Auralex’s helpful Acoustics 101 document.

”Acoustic design is crucial to audio perception. Auralex and their Acoustics 101 gave us the tools to build a completely soundproof studio, and their acoustic treatment gives me the actual sound produced, not overtones, reflections, or any other untrue representations of the sound produced.” – Peace, Serj 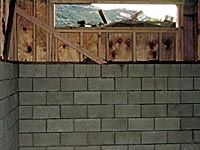 To reach his goals, Serj utilized the same methods that thousands of Auralex customer’s use each year: Auralex’s Room Analysis services. Through a relatively brief exchange of e-mails and phone calls, Auralex was able to review the construction plan that Serj had designed after he read Acoustics101. Some minor alterations and enhancements were discussed. The basic space was an old ”out” building. The control room had a nice overall size, but the ceiling was low (7.5′). It was determined that the acoustic benefits of raising the ceiling would not outweigh the construction efforts and costs… so, instead they used detailed mass layers and treated with Studiofoam, LENRD bass traps, and T’Fusors. 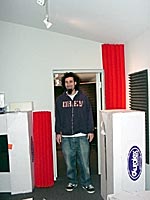 The live room had a nice vaulted profile, but was far from an isolated world-class tracking space. The plan included a corner vocal booth. Isolation was achieved with double wall construction including Auralex SheetBlok Sound Barrier, 2” Mineral Fiber, and Auralex RC-8. In both the live room and booth, isolated floors were framed with Auralex U-Boats (per Acoustics 101).

A blend of 2” Studiofoam (Charcoal), LENRD bass traps (Red), and Sunburst Broadband Absorbers (Red) were selected for wall treatments. The ceiling was eventually ”peppered” with a 25% coverage of T’Fusors. A PlatFoam drum isolation riser was constructed and GRAMMA amp isolation risers were placed under the selection of Vox and Marshall rigs.

Serj now truly enjoys his studio, which allows him to create on his schedule. He not only appreciates the results of his rooms, but the ”DIY” nature of Auralex products, which were exactly suited to his goals and vision.

Thank you Serj for your support of Auralex, and we look forward to more great music!