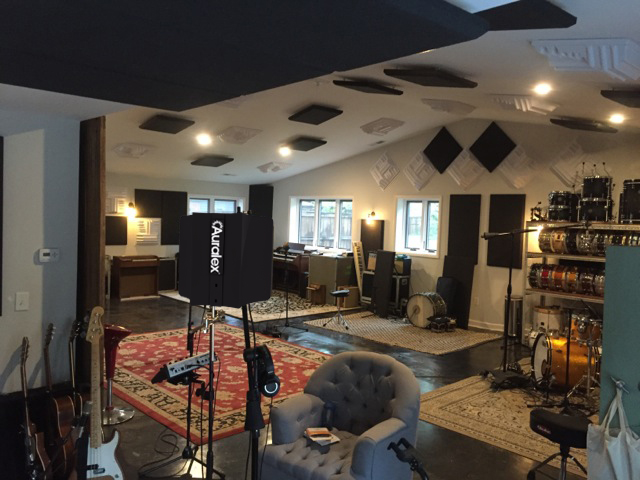 GRAMMY® - nominated and acclaimed Christian artist Matt Maher is noted for his assured vocal delivery and his tightly written, accessible songs that draw upon his faith and life experiences. When he’s off the road — which isn’t that often when you look at his seemingly relentless tour schedule — Maher wants to spend time in the spacious building he’s outfitted as a writing and rehearsal studio behind the house he and his family occupy near Nashville. “Moving to Nashville, it’s every writer’s dream to be able to walk fifty feet from your house to a creative space,” he says. But the detached garage came with significant acoustical issues, including a 5.5-second reverb time (RT) that would reduce the definition of instruments and vocals performing in that space. The solution came from Auralex® and its broad array of product choices, which gave Maher exactly the right tools to address each specific problem in the room. These included Auralex B222, B224 and M224 ProPanels™; ProPanel™ Clouds; SonoSuede™ Panels; T’Fusor and MiniFusor Diffusors; DST-LENRD™ Bass Traps; GRAMMA® v2 and GreatGRAMMA® v2 amplifier isolators; and HoverMat™ and ProPAD™.

“All the best music I know was made in a single room, and that’s how I wanted this space to be, at least for the first chapter,” says Maher, who placed the control “room” in an alcove in one corner, somewhat acoustically isolated but still fully engaged with the rest of the room. But taming that room was a challenge. A slew of throw rugs and carpets helped damp the concrete floor, and Maher and a knowledgeable friend installed some additional drywall to create a thin but critical air gap that would help contain sound. Two large barn doors inside help add some woody warmth. But the size and reflectivity of the space was still a major concern. That’s where Auralex entered the picture. 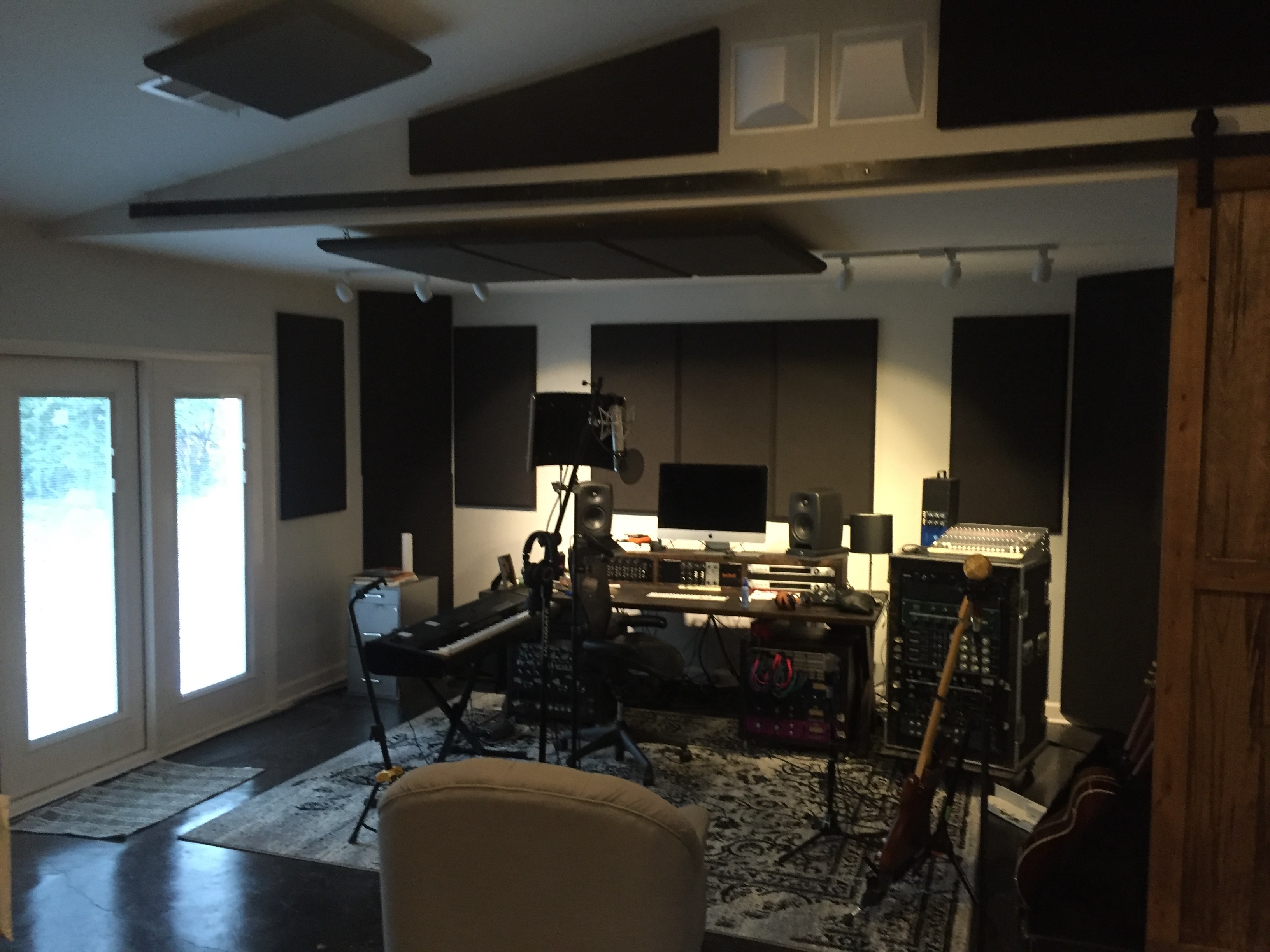 Auralex came in and did some interior measurements as well as a diagnostic recording of the room’s ambient sound, then put those into Auralex’s online calculator, which sent back precise instructions on exactly which products to use and where, and how to install them.

“It’s amazing how spot-on the acoustical solutions were,” says Maher. “Auralex’s online system was able to analyze the input and come back with a plan for the room that actually worked, and they were very easy to install. What had been a kind of questionable place to play, write, and even record music did a 180 and became a great place to do all three. We put the ProPanel Clouds and some of the ProPanels on the ceiling, and they just cut the reverb around the mix area to nothing. We went from a five-and-a-half-second reverb time to two-and-a-half-seconds. It was amazing.”

And, adds Maher, Auralex did more than just control reverb time. “The Auralex treatment took my space, imperfect as it was, and transformed it into a sonic environment with great feel and precision,” he says. “It took out the problematic acoustical characteristics and it also enhanced some of the better [sonic] elements. That’s the ultimate solution.” 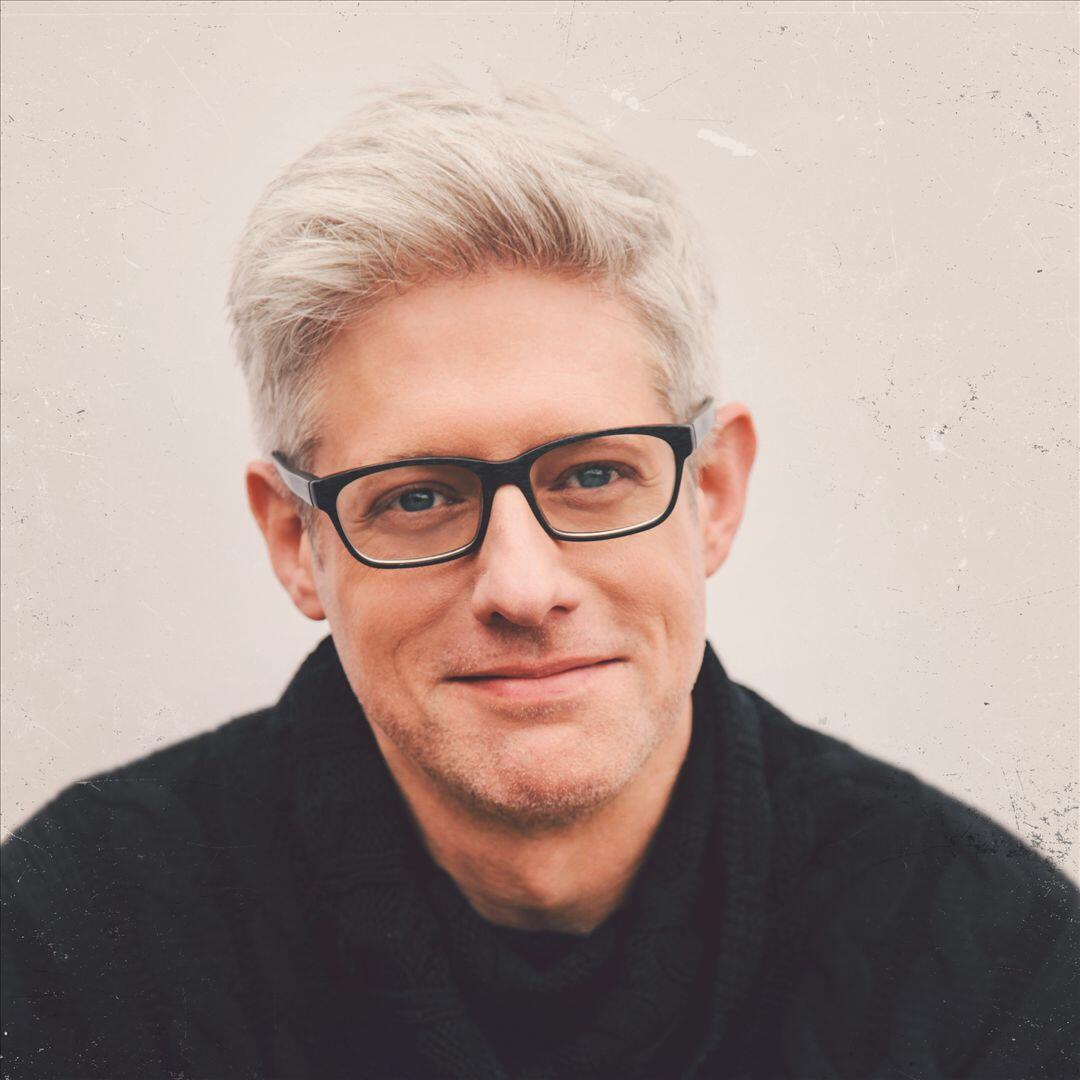